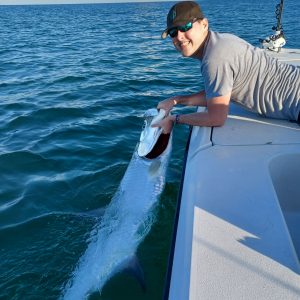 With our recent hot temperatures and water temps hovering at 90* in the Gulf, and mid 90’s on the flats in clearwater, you’d think fishing would be slow. But on the contrary, fishing is just as hot as the weather.

Tarpon have been my mainstay. Whether it’s in the Gulf or the backwater and passes, these giant Silver Kings have been feeding well on pinfish, threadfin hearing and big pilchards. We have had several takers, catching a decent number of these Chrome Battlers from Indian rocks beach to Clearwater Beach, ranging from 40 to 150 lbs. This trend will continue through July, so if you want to test your endurance, now is the time.

Snook fishing has been some of the best I’ve seen in years. Snook have been everywhere, but most are close to the passes due to the slightly cooler water. These Bad Boys have been feeding on pilchards quick tip do not over load your live well as oxygen levels are very low and can ruin your trip. Best fishing at the end and the beginning of the tides. Most fish are averaging 8 to 16 lbs.

Redfishing has been so so with fish averaging 23 to 26 inches being the norm. The beginning of the outgoing tide has produced the most results. These Reds have been hanging on oyster bars and potholes on the flats with some water flow. Dead bait has been the ticket, due to the hot water.

So forget about the heat, and let’s get out and do some serious summer fishing.